On, or at any time after, the lecture’s release date of 15 November onwards once your booking has been received, you will be sent the links giving access to the lecture. You will then have the choice of a YouTube video or a downloadable audio podcast.

Yeats sang in the name of an ancient Ireland. His passionate study of mysticism and the supernatural fired his active involvement in a movement for the revival of Celtic identity, a poetic currency of fairies, dreams and the melancholy of decay. He cherished folk-tales, celebrating them as vitally in his verse as the history of his own times. But where did Yeats’ s voice, and his extraordinary lyrical gift, come from? Born in Dublin in 1865, he would become one of the two greatest poets of the twentieth century writing in English. 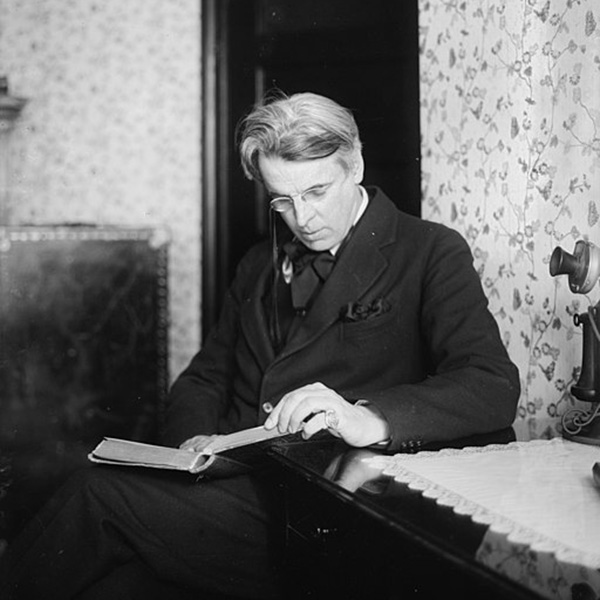 "Thank you so much for your W B Yeats lecture. Very lyrical and brilliant. I thoroughly enjoyed your talk. You have shed new lights on Yeats's work and life".
Qiling Xu, London
Online version released 15 November 2020
"How very much we have enjoyed your Yeats lectures. You have lovely skills in giving us lots of information (and very varied) cunningly arranged so as to illustrate Yeats’s changing vision of things, and the moods and atmospheres and stances-to-the-world that came to him with them. And sometimes too how his rhythms and meters, even verse-lengths, do their job for him. And what a pleasure to hear you read all those favourite poems. As well as some of the Irish ballady ones that we’ve rather skipped over before. Thanks very much for all that".
Janet and Patrick Coldstream, Hertfordshire
Online version
“Your fine talk (performance, more like) on Yeats was like being invited to dance along with Yeats, his poems, and your vision of both”.
R-L Abrahamson after Yeats Night in West Bay

W B Yeats is the ninth in the 2020 series of ten lectures specially recorded by Graham during the lockdown for release online to bookers.  Recordings of all ten are now available.

Your booking will be acknowledged promptly and you will receive a link to the talk at any time on or after 15 November.