The link giving you access to this lecture will be sent out after your booking has been received. You will have the choice of a YouTube video or a downloadable audio podcast.

Famed, filmed and widely read for his novels, Thomas Hardy was actually always a poet who happened to write novels too. He started out as one as a young man, and then, in 1895, the second most important date in Hardy’s life for him and for us (1912 being the first), when the critics turned against him for Jude The Obscure, he turned their hostile energy to gold by putting up the shutters as a novelist and returning to poetry, his first love. Ending his life more than thirty years later with eight books of verse amounting (like that other master of both genres, D H Lawrence) to some eight hundred poems, Hardy made poem narratives vibrate with that same intensity of place that he had played the alchemist with in his novels. He harnesses the energies of a psycho-geography, a telluric energy of association and belonging which set light to his poetry's personal revelation. That poetry reached its high point after the death of his first wife Emma in 1912. As though this was the moment that the poet in Hardy had been preparing for all his writing life, he became almost overnight a master of the love-ghost poem. Here were heartfelt and heartrending lyrics of tremendous power, pathos, devotion and erotic atmosphere where he sets the reader on the same Cornish clifftop or in the same Dorchester garden at twilight to sense and feel, listen and think to hear, just as he did. So, in these greatest poems of his, celebrations of graphically remembered natural and human drama second to none in the twentieth century, Hardy steps into a geographically known realm of autobiography which feels - as it is - thoroughly un-fictional in time and place, opening our senses on the welcome knife-edge between memory and hallucination and sending us up with the crests and down in the plummets of his daring verse-forms, as adventurously experimental and intoxicating as anything from Pindar to Donne. How could our own beloved dead not come rushing back to us as we read Hardy’s poems and he and they re-awaken us to the intensity of the places where we stand or stood, and the auras of our time there, and so lead us into fresh reflections on something we may not have realised: that when we are in love or mourning or dream or regret, our scenarios of feeling already contain the words to remember them later by? 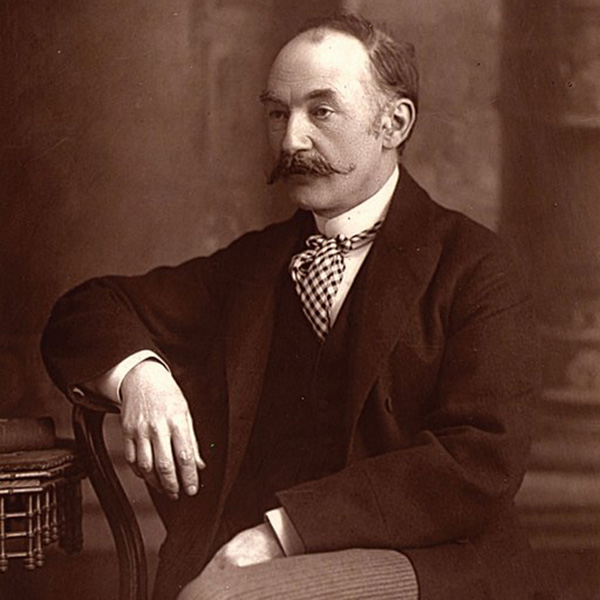 “We loved your lecture on Hardy. Each time I read him, I learn and appreciate him more.”
Jane Hole, Somerset
after Thomas Hardy Night in Taunton
“Now there is clarity. There is the harvest of having written 20 novels first”.
(Ezra Pound, reviewing Hardy’s Collected Poems).
“Graham Fawcett’s unique style of performance, honed by his years as a broadcaster on BBC Radio 3, informs while entertaining and enriching”.
Anna Powell
Sladers Yard, West Bay, Dorset
Graham's aim is always to give audiences who love poetry a fresh experience of it which he hopes will feel more like listening to a live radio programme with readings rather than to a lecture, blowing away some of the more daunting associations we have with that word.

Thomas Hardy is the eighth in the 2020 series of ten lectures specially recorded by Graham during the lockdown for release online to bookers.  Recordings of all ten are now available.

Top picture: The secluded cottage at Higher Bockhampton near Dorchester in Dorset was built by Thomas Hardy’s great-grandfather in 1800 and has been little altered externally. The walls were constructed from cob and these have been given weather protection by brick facing or rendered cement. Hardy was born in this small thatched cottage in 1840. (Photograph by Peter Broster).

Your booking will be acknowledged promptly and you will receive a link to the talk.

We will gladly accept online payment in the methods below. You don't need a PayPal account (see foot of page you come to after clicking on Buy Now above).